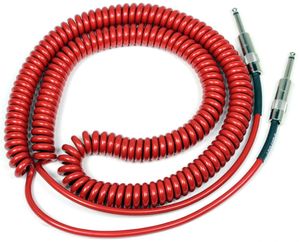 So here is my second attempt at descerning the effect of instrument cables on guitar tone. I received some feedback on my first experiment that my experiment may have been compromised by placing the test cable after the looper.  Apparently, the buffer in the looper might neutralize any inherent difference in the cables by changing the standard guitar/amp impedance.  I needed to think of a way that I could conduct the experiment again with just guitar --> cable --> amp.  Since I'm no longer using the looper, I was faced with the problem of having an identical perfomance recorded each time. I'm wary of recording four different performances through four different cables.  Even if I was blind to the cable being tested, I was worried that the variation in my guitar performances might be greater than what is a potentially subtle difference in cable performance.  My solution to this problem was to use an Ebow.  I placed my guitar flat on the floor, and taped the Ebow to the pickguard to make sure that it didn't move during the cable swaps.  I then recorded the open D string through the four different cables.  I then removed the Ebow and repeated the same proccess on the open G string.  Finally, I repeated the process one last time but this time I used a capo on the 4th fret of the G string and recorded a B note.  I edited the audio clips so that you will hear the D, G, and B notes, and then I stacked the same three performances in my DAW so they can be heard as a chord. I was hoping to give a few different perspectives on the sonics to determine any difference (or again, lack thereof).

Used in this manner, the Ebow would give the same "performance" to each cable, so that we can assume any differences (or the lack thereof) in the recordings is a result of the different cables.

I have received some feedback on this experiment that the recordings don't sound very "guitaristic."  As anyone who as ever wielded an Ebow knows, an Ebowed guitar doesn't sound exactly like a guitar, which is the reason for it its useful charm.  However, I think this should actually make it easier to hear any differences in the cables as we are able to compare what amounts to one pure, sustained tone to another, regardless to it sounding like a guitar or not.

The cables I tested (in no particular order) are:

Listen for yourself and decide!